Through the won, I still think about the final dark knight wizard 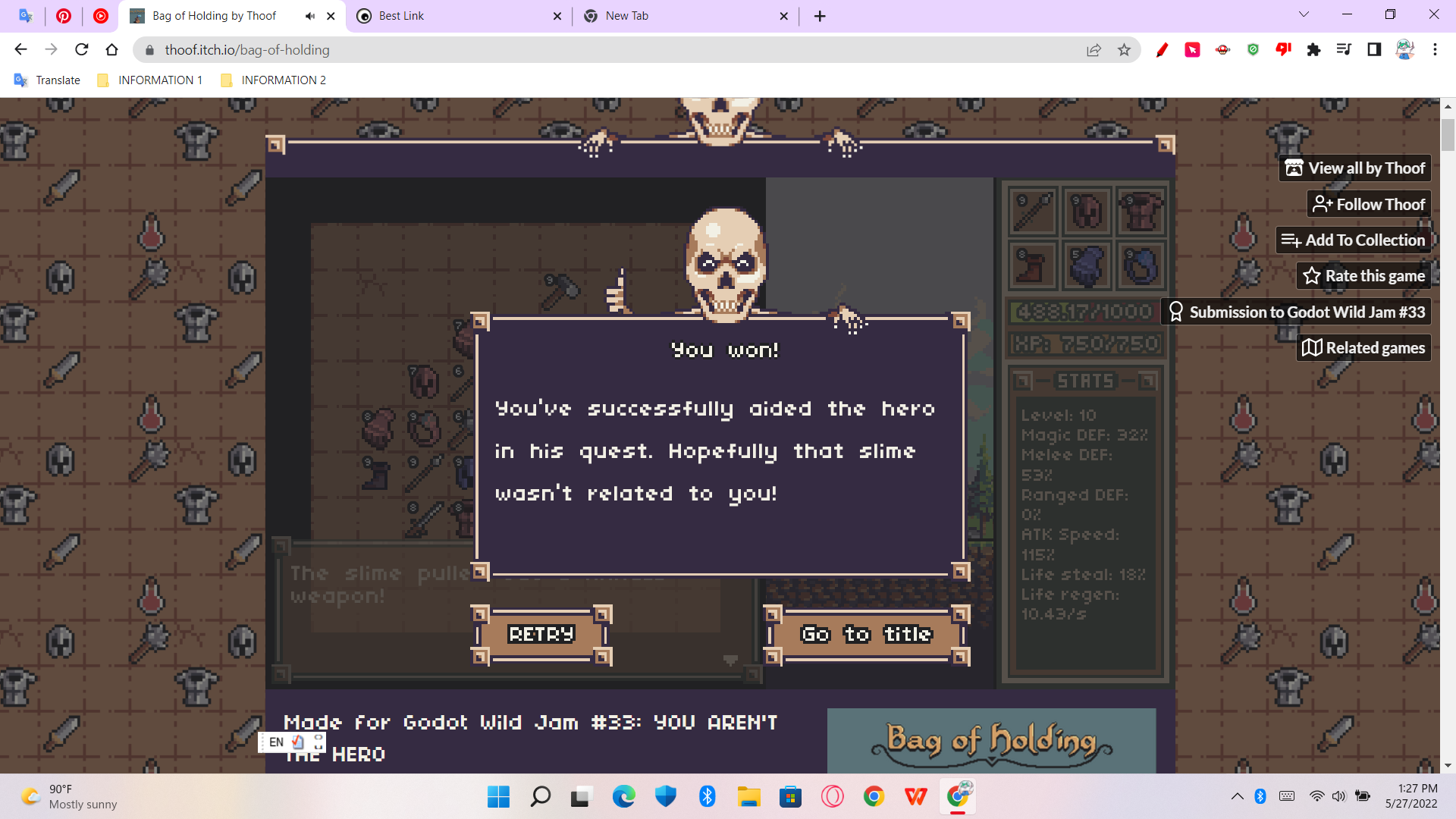 Brilliant idea for a game. Very enjoyable. I'm sure there are other aspects you could explore for pushing items around, items that affect other items' movement comes to mind.

I really liked the game, but I wish we could loop around the screen. Not the items, but us, because otherwise any item on the edge is just lost and you might as well push them out

Screenshot of the crash

Very interesting game, im defeated the big slime and game ended, 12 minutes of gameplay was not too bad as i think on start, its very interestring game, you can add some new locations, and make it more interesting i think, anyway very good idea and game, thanks!

Game crashed shortly after the hero killed the first non-skeleton enemy. I pushed out a few lower level items I felt were unnecessary just beforehand. Here's a screenshot: 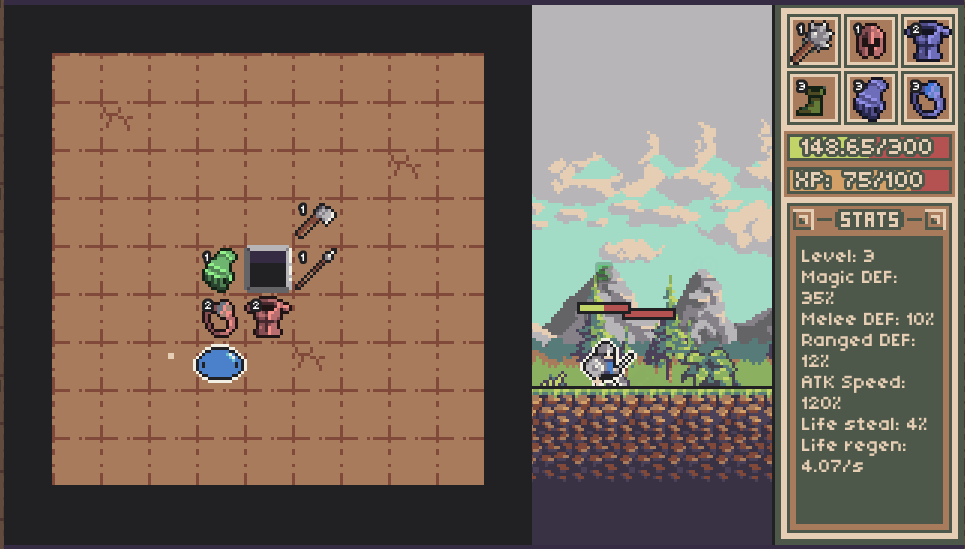 Just played through the game for my youtube channel! Super awesome game, but I kinda wished that the final boss lasted a bit longer. Would also be super cool to see a full game of this. Here's my playthrough on my youtube channel: 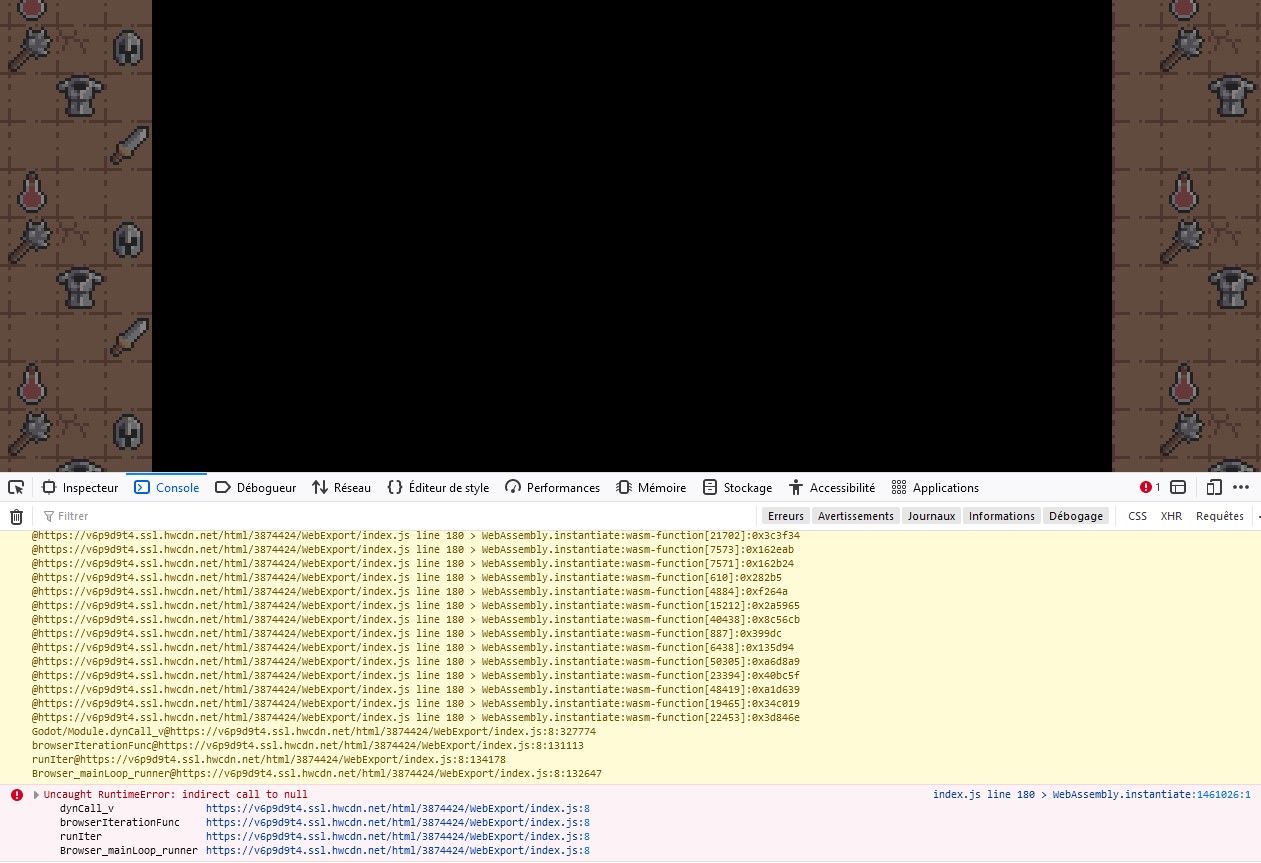 The game froze when I reached Level 10, please fix...

(I was playing web version)

This is what it looked like when it broke(I could not find the browser console anywhere, apologies!)

Reply
eee i is god1 year ago

froze right as i got lvl 10

I got a crash before level 10, here's how it looked 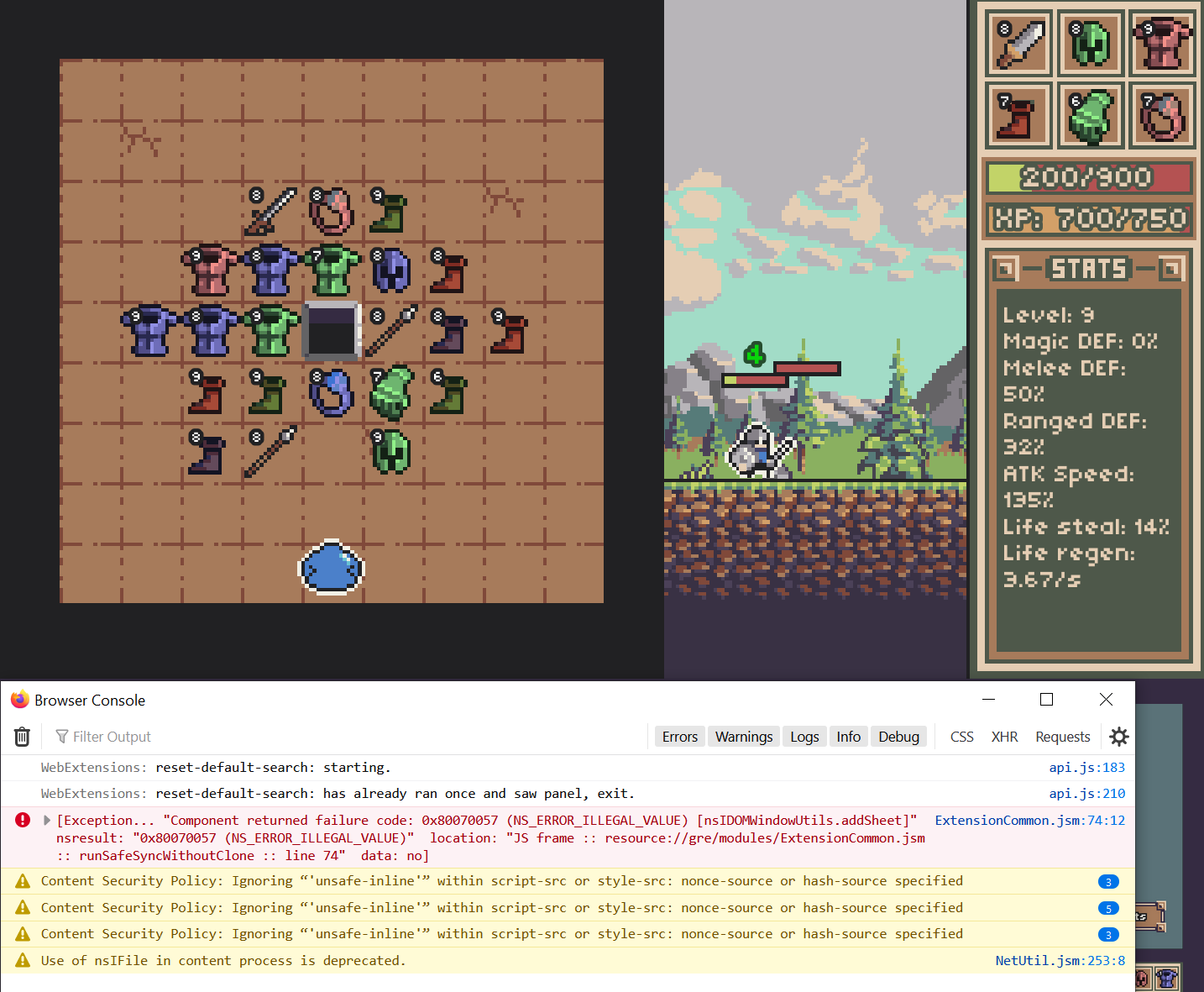 Hey there, OneFourtySevenAM here, and I just played your game for a video series I have called "Indie Picks". If you're at all interested in seeing what I thought of your game, feel free to watch the video.

Got a crash at level 4: console says 'table index is out of bounds'

I would love to see a much longer boss fight. My hero defeated the boss almost as fast as any of the normal enemies so it didn't even have time to switch to a third attack style. The boss was the most exciting part of the game for me since it puts to the test all of the work you did throughout the run. A longer boss fight would reward players that were able to keep gear for each style and punish players that did not. Depending on the damage scaling, it could also be a motivator to create a stash of otherwise unnecessary healing potions.

Nice game! Looks really polished! I think the only thing that I don't like about the game is that we don't have enough time when we encounter the next enemy. There is no way that I can process the info at hand and change my items fast enough. Or maybe I'm doing something wrong? I don't know.

I have a question but it is going to be a little bit off-topic. I see that you got many comments on this jam game. How did you manage to advertise a jam game this much? I am a developer too, I would like to know how to do better marketing!

Thanks for the feedback :)

I didn't really do too much marketing for this. I do have a decent-sized twitter account so that slightly boosts the view count. The game also won this jam game, which resulted in it getting featured in a youtube video. The jam also happened when there weren't any larger jams going on at the same time, so there were less games being published.

I think the best thing you can do is make your cover image, screenshots, title/descriptions as appealing as you can. If enough people view your game initially then it'll end up on the itch front page which will boost the view count even more. And if the game itself has an interesting mechanic or some other draw, then other people will sometimes advertise it for you via doing youtube videos, blog posts, etc.

This is very nice, but it doesn´t encourage much replay if it´s just that same level and enemies. It would be nice if there were several different levels (different backgrounds and enemies), with increasing level of difficulty towards a proper ending.

Very nice! Got sucked into this very quickly and enjoying it a lot - it did freeze, so here's the error message from the console in Firefox:

Uncaught RuntimeError: index out of bounds

Cool game you made! Just out of curiosity, which game engine did you use, or is it home grown?

I used the Godot engine for this game.

I really enjoyed the game but I had a crash! I was in the middle of the game and it froze the game but the music is still playing. 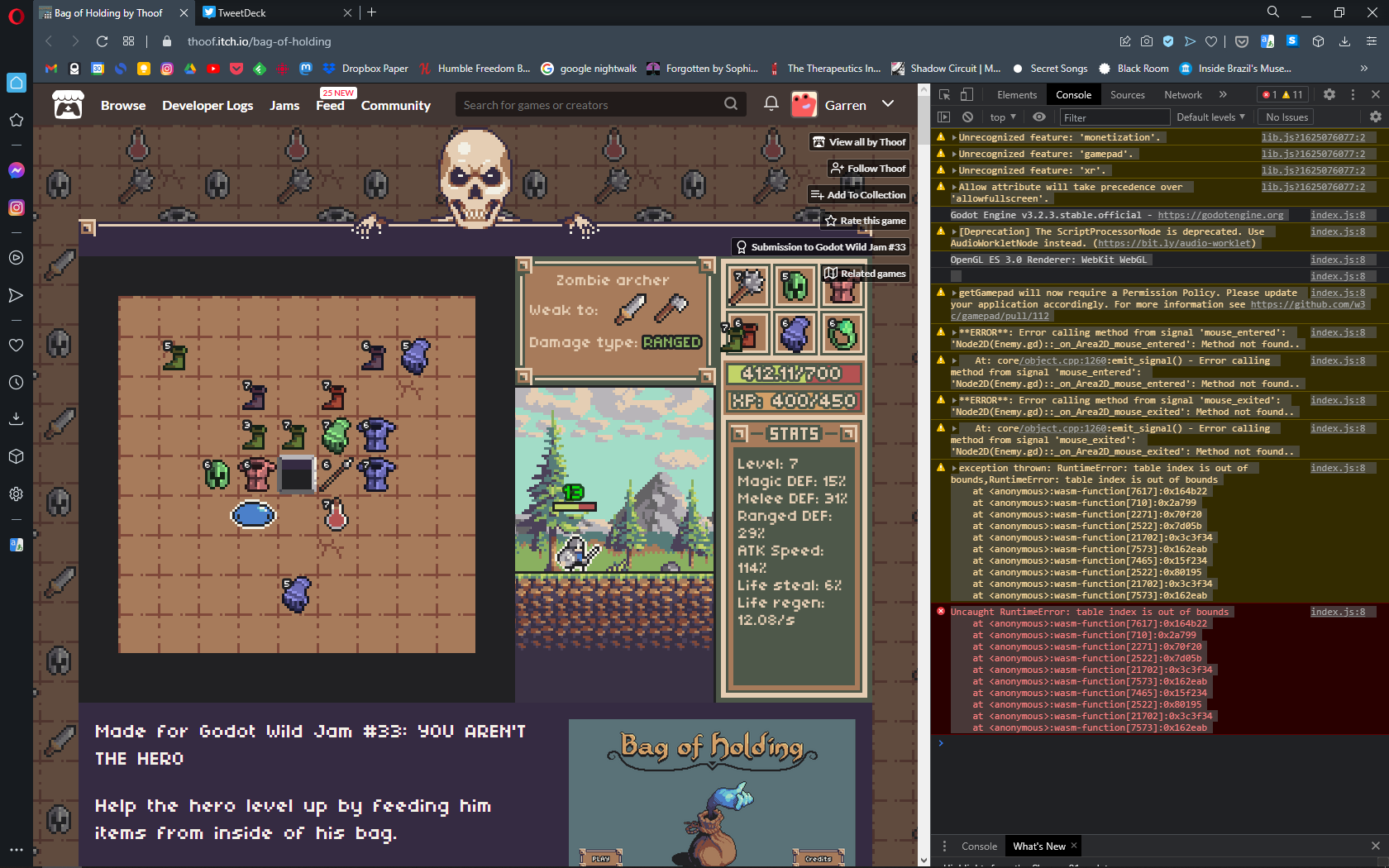 Super fun game! It did freeze for me after about 10 mins of playing, mid-combat, but the audio is still going. Here are some screenshots -- maybe a memory leak? 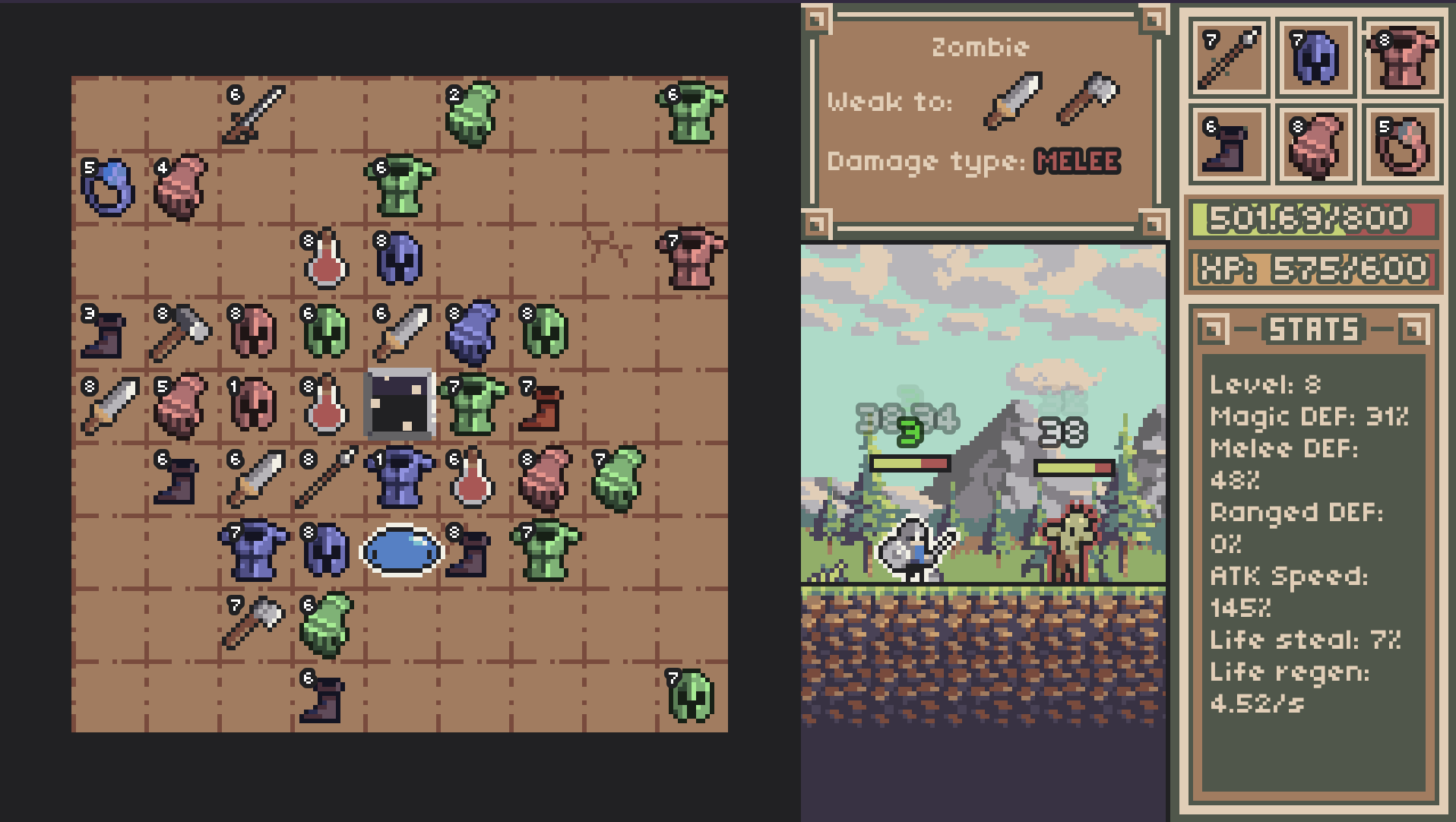 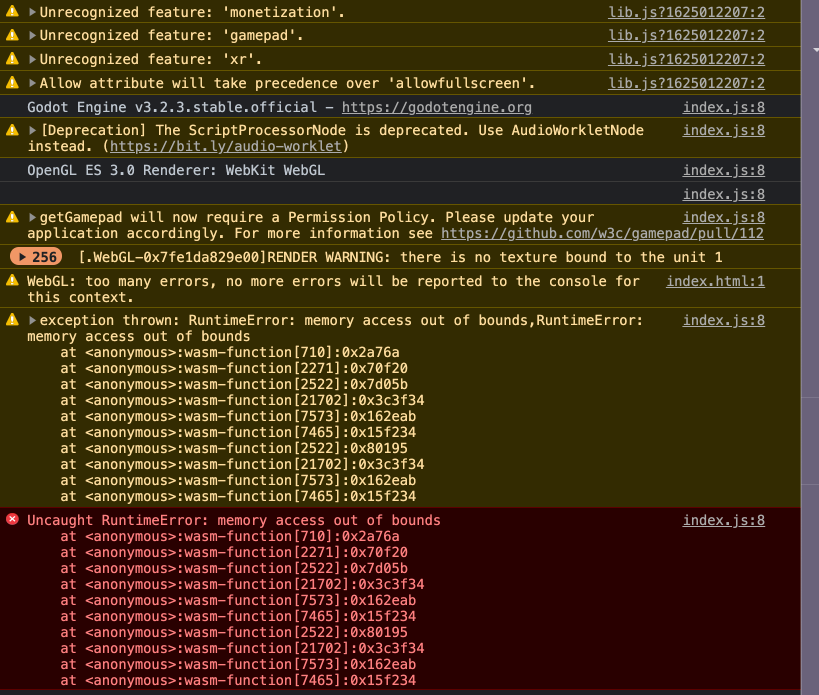 Thanks for the report!

Really cool! It has the loop hero kind of game progression, but the simplicity of the game just instantly got me hooked!

This game is brilliant, original, and charming. Very well done!

I just played on stream and it was sooo surprising, I really like the concept of the game.
I missed a pause button and some kind of sound that lets you know you are low on life, but I reallly enjoyed it <3 well done!

it doesnt load, just a black screen. i downloaded it and it said opengl error which is probably why it doesnt work in the browser

I love this! Great gameplay. I love how it's a short, but sweet game. The concept is pretty funny too. Fingers crossed that wasn't my cousin or anything. Can't wait to see more from ya'll great stuff!

Fantastic game you have here, reminds me a little bit of Half-Minute Hero from the PSP days. Anyway to contact you directly for potential commission/paid work?

Game freezes randomly for some reason.

I did it! killed a member of my family probably

tried launching it, it has been loading for around an hour now, still not launching...

Hey! Are you playing the web build, and if so what browser are you on?

I am on Opera but I also have chrome installer

Nice game! I ran into the crash, but managed to get to the end on the second playthrough. I can do even better than a screenshot, check out the vod from my twitch stream!

Thanks, that's really helpful :) I'm glad it didn't happen on the second playthrough as well!

Super Awesome!  I really like this.  Super fun puzzle and really creative premise. 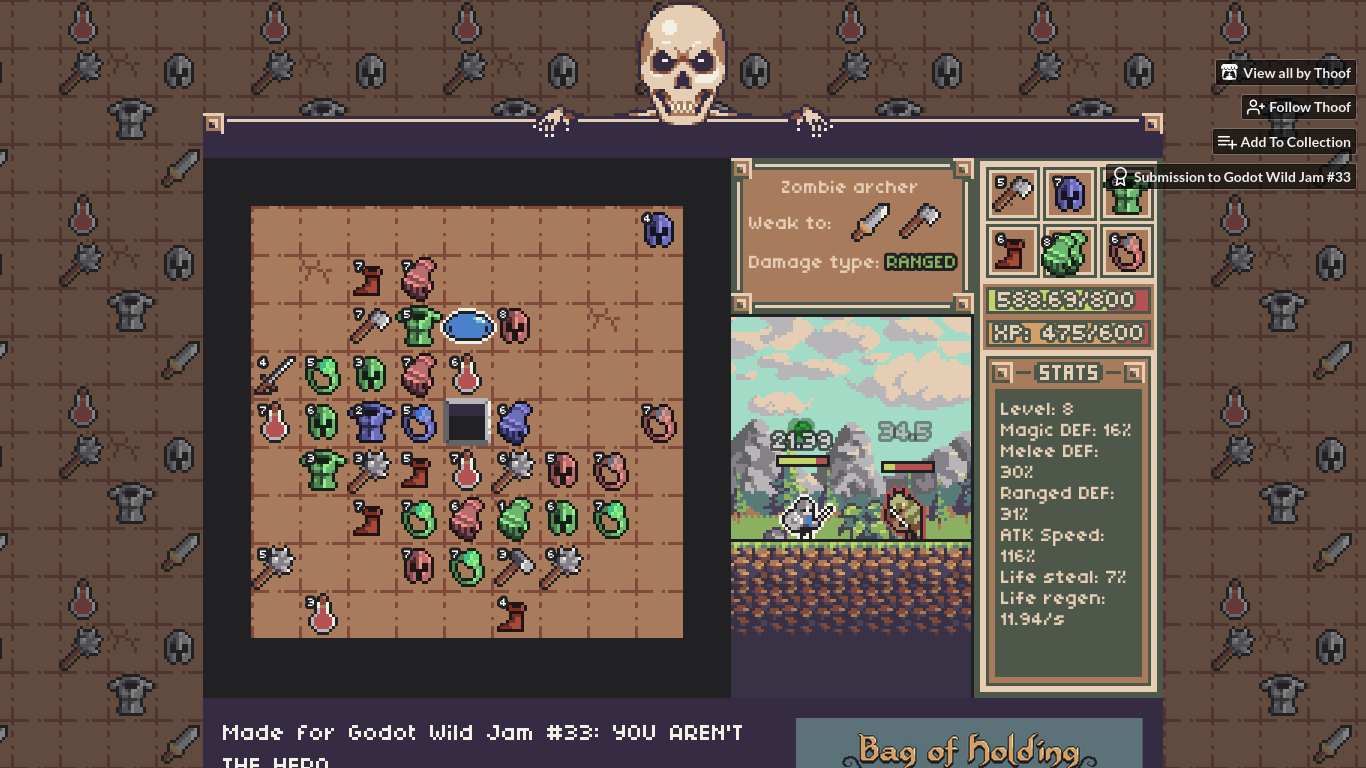 Here's a screenshot of my experience with the bug. I'm using a different browser than google called Brave which comes with adblock, so that might be causing an issue.

Thanks! Guess I've gotta add "on enemy death" to the growing list of possible causes

very fun. there is a bug where it just freezes